Established in 1911, this demographically diverse neighborhood is just southwest of downtown Houston and is known for its eclectic mix of restaurants, retail, and residential.

The walkable area boasts world famous art at The Menil Collection, peace and serenity at The Rothko Chapel, and the preserved-in-time splendor of 18 grand historic homes of Courtlandt Place. Considered by some to be the Heart of Houston, Montrose is a delightful mix of world-class and hole-in-the-wall restaurants, antique stores and resale shops, energetic bars and nightclubs, and casual coffee shops. The neighborhood also presents a mix of homes from Mission-style bungalows and restored mansions from the early 20th century to four-story contemporary townhomes.

Different sections of Montrose are served by MacGregor, Poe, Wharton, and Wilson Elementary Schools, all part of the Houston Independent School District. Two area middle schools – Lanier Middle School (I went to Lanier MS!) and Gregory-Lincoln Education Center – serve the neighborhood, whereas all high school aged students are zoned to Lamar High School in nearby River Oaks. Montrose is also home to the University of St. Thomas and The High School for the Performing and Visual Arts, a magnet high school with notable alumni such as Beyonce, Chandra Wilson, Lisa Hartman Black, and other musicians, dancers, actors, and other artists.

From outdoor burger joints and small cafes to award-winning culinary sensations, Montrose has been known for its diverse culinary cuisine for decades. A number of restaurants, including The Pass & Provisions, Uchi, Da Marco and Underbelly, have recently appeared on lists for top restaurants in the U.S. Niko Niko’s has been serving Greek fast food since it opened as a walk-up stand in 1977. Barnaby’s Cafe, named for the restauranteur’s childhood sheepdog, has three locations in the neighborhood. And Baba Yega Café has one of the best patios in Houston. There are so many restaurants in Montrose that you could eat at a different restaurant every night for seven months!

In the 1960s and 1970s, Montrose became the center of the bohemian counterculture movement with artists, musicians, war protestors, and other young people making the neighborhood their own. Throughout that time and decades after, Montrose became the established home of the LGBT community. Famous residents of Montrose throughout the years include Howard Hughes, Lyndon Johnson, and Clark Gable.

Location and Gem! Spacious one bedroom, one bath unit located on the 7th floor of Parc V mid-rise! Outstanding views of the Downtown skyline. This mid-rise building has m...

Gorgeous and contemporary, this freestanding 3-bed and 3.5-bath home with 3-car garage is located in a small and quiet community in the heart of the exciting Montrose are...

Iconic property located in a prime neighborhood in Montrose on a 17,550 square foot gated lot on a cul-de-sac surrounded by beautiful oak trees. The 4,451 sq. ft. buildin...

Stunning, like new home, ready to move in! Located in the desirable Montrose neighborhood. Enjoy a spacious open floor plan with tons of natural light. The private drivew...

Extremely rare opportunity to purchase a like new condo in an amazing walkable location. This small home lives large with expansive glass with green views from this groun...

DID NOT FLOOD EVER! VACANT easy to show. Home features roof top terrace with outdoor fireplace and a spectacular view of downtown Houston! Game room on terrace level w...

Spacious two beds, two-bath condo in the heart of Montrose has a walk score of 85 and a ten minute drive to downtown. Located on the second floor of the Lovett Place cond... 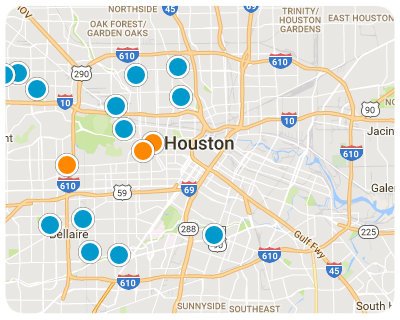